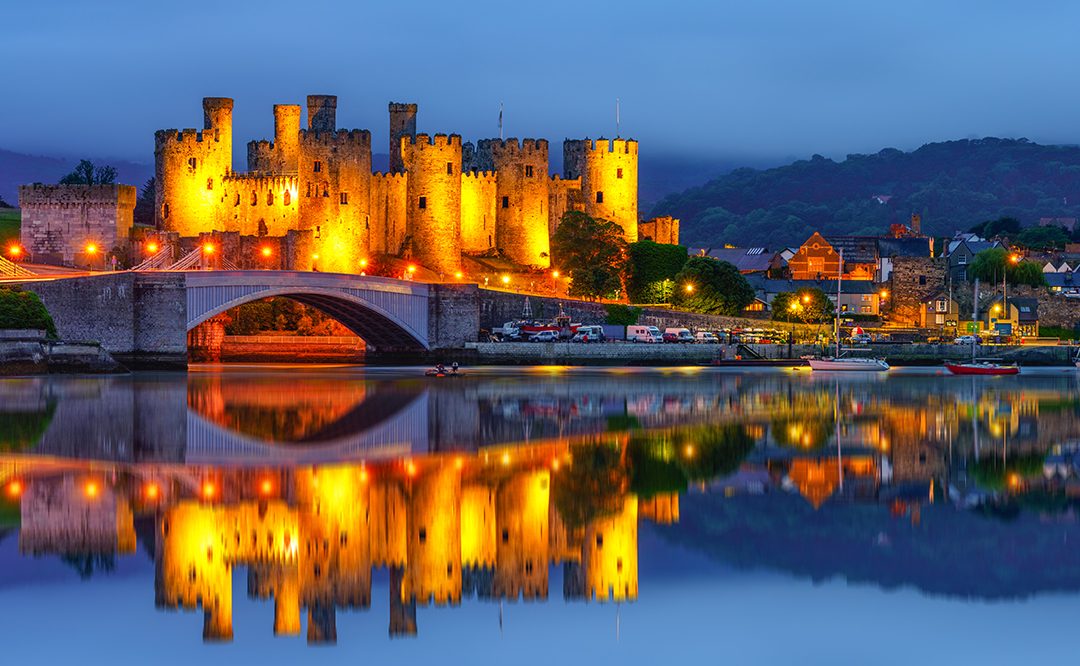 Towering mountains, titanic feats of Victorian engineering and castles of medieval kings are a few of the amazing wonders that await discovery in this guide to the best places to visit in North Wales.

The highest mountain in Wales is also the highest in the UK outside the Scottish Highlands. Its English name, ‘Snowdon’, derives from the Old English for ‘snow hill’, and its Welsh name, ‘Yr Wyddfa,’ is thought to refer to the mythical story of King Arthur’s defeat of the giant Rhitta Gawr.

Millions of years have passed since volcanoes formed Snowdon then glaciers moulded it into its distinctive horseshoe shape. More recently, Edmund Hillary practised rock climbing on the mountain before embarking on the 1953 expedition on which he become the first person to stand at the summit of Everest. Snowdon’s rocky silhouette also looms large in legendary history. Some believe that the bed of one of the lakes that lies on its slopes is the resting place of King Arthur’s sword, Excalibur. The mountain is also a designated nature reserve and the only known habitat of the elusive beauty of the Snowdon Lily.

Six trails lead to Snowdon’s summit. The easiest tracks a route up gentle inclines, another zigzags along a dramatic ridge top, and the most challenging option includes exhilarating sections of sheer scrambling. Those who don’t fancy the climb can enjoy mountaineering at its most leisurely aboard the Snowdon Mountain Railway. However you make the ascent, once atop the mountain, you will be greeted by panoramic views over the peaks of Snowdonia.

Britain’s tallest single-drop waterfall cascades off the edge of the Berwyn Mountains from a height that exceeds that of Niagara Falls. The English translation of the waterfall’s name ‘Pistyll Rhaeadr’ is “spring of the waterfall”.

According to an ancient Welsh legend, the lake that feeds Pistyll Rhaeadr was once home to a dragon that terrorised the local area but was eventually outwitted and defeated by canny locals. Ever enchanting, these falls can be seen at their most ethereal on rare occasions during the deep, frozen depths of winter when they crystallise into a gigantic glittering ice sculpture.

Pistyll Rhaeadr is the centrepiece of a five mile walk that ends atop the verge over which the falls tumble. From there you can enjoy views that sweep over the wide green valley into which Pistyll Rhaeadr flows. If you want to enjoy natural beauty, this waterfall is one of the best places to visit in North Wales.

“What shall I liken it to? I scarcely know, unless it is to an immense skein of silk agitated and disturbed by tempestuous blasts, or to the long tail of a grey courser at furious speed. I never saw water falling so gracefully, so much like thin, beautiful threads as here.”

Shouldering the Llangollen Canal over the Vale of Llangollen are the 18 colossal stone arches of the Pontcysyllte Aqueduct, the longest aqueduct in Britain and the highest canal aqueduct in the world.

Pontcysyllte finally opened in 1805, having taken ten years to design, build, and test. After its completion, it stood, as it still does today, as a monumental link between England and Wales, and the rivers Severn, Dee and Mersey. The bridge was named in testament to its function. In English, Pontcysyllte translates, ‘the bridge that connects’. 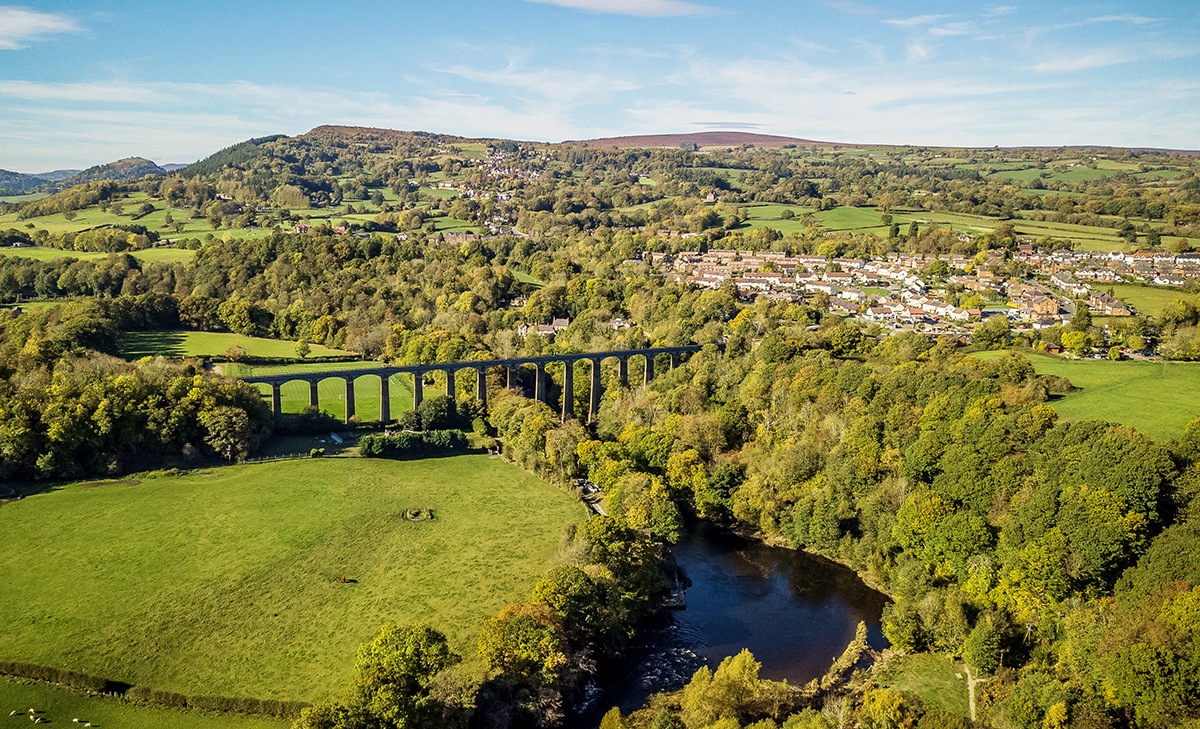 “A pioneering masterpiece of engineering and monumental metal architecture, conceived by the celebrated civil engineer Thomas Telford. The use of both cast and wrought iron in the aqueduct enabled the construction of arches that were light and strong, producing an overall effect that is both monumental and elegant. The property is inscribed as a masterpiece of creative genius”

Pay a visit to admire its magnificent spectacle, or, if you have a head for heights and a fancy a thrill, make your way across it on foot or by barge.

The walled medieval town of Conwy and the gigantic castle that overlooks it are a UNECSO World Heritage Site and among the most magnificent architectural treasures that survive from their era. Lying backdropped by the mountains of Snowdonia at the mouth of the River Conwy, the town was built by Edward 1st of England as part of the ‘iron ring’ of fortifications he erected across Wales following his conquest of the county.

Today, Conwy is one of the best places in North Wales to visit if you want to experience the region’s long, fascinating history. Explore its cobblestone lanes, and among other attractions, you’ll discover ancient houses including the oldest in Wales, the smallest in Britain, and the wonderfully preserved home of an Elizabethan merchant. Visit the castle for the chance to climb to the top of its mighty towers where you’ll find views that sweep over the town, the river estuary and the surrounding countryside up to the Snowdonian mountains that line the inland horizon.

During the 1880s, Liverpool Corporation Waterworks flooded a remote Welsh valley to create a new source of fresh water for thirsty Liverpool. The result was the creation of Lake Vyrnwy. The mountains of the Berwyn Range that surround its shores and the Gothic tower that stands above its surface give Vyrnwy a fairy tale charm that visitors can experience along the lake’s many surrounding cycling and walking trails, which include a section of Glyndŵr’s Way. 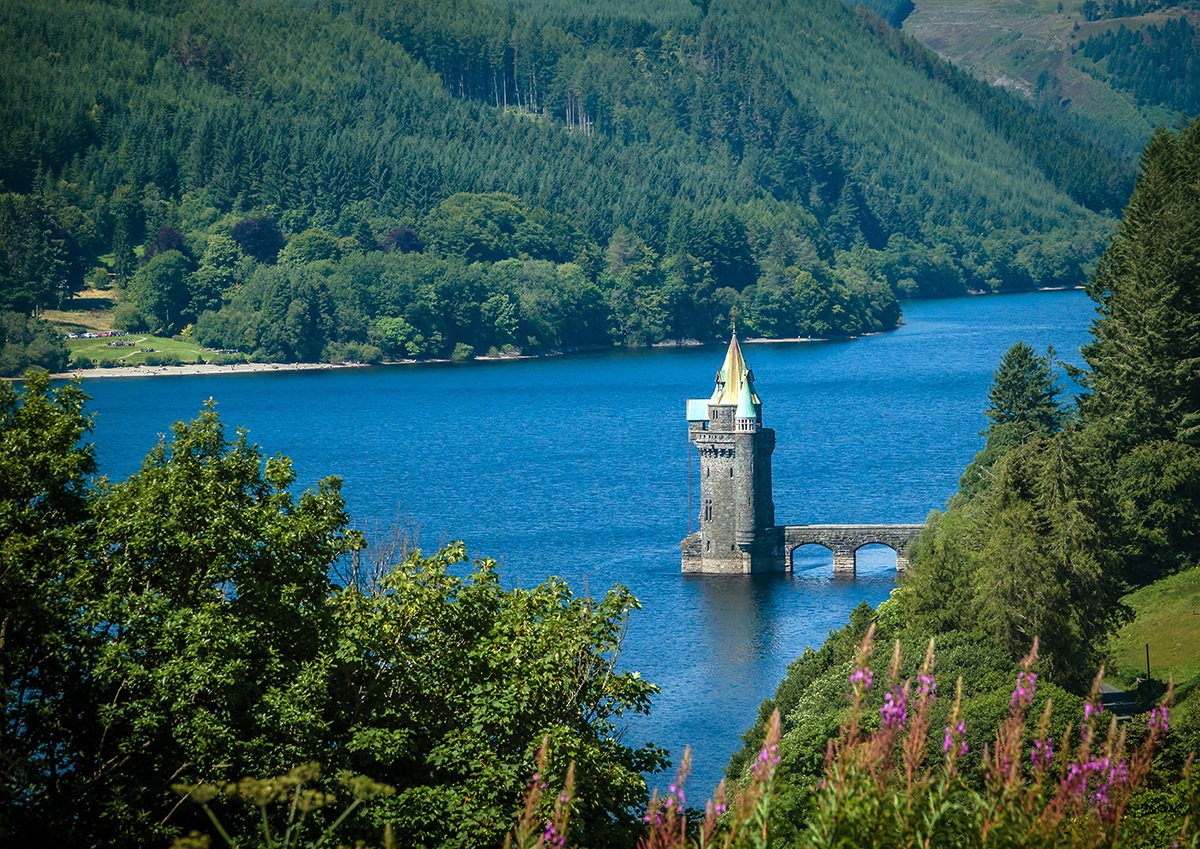 As a designated nature reserve, this is also one of the best places to visit in North Wales for wildlife spotting and birdwatching. Keep an eye out for the rare butterflies, dragonflies and birds including peregrine falcons that live among the lake’s surrounding forests. Here you will also find a sculpture park, local craft shops, cafes, and waterside picnic spots. Visit after dusk to discover why Vyrnwy has a reputation as one of the UK’s best stargazing destinations.

If learning about these wonders has left you with wanderlust, enquire about renting our pet-friendly holiday cottage in North Wales.

And if you’d like to make the remote tranquillity of the Berwyn Mountains your home from home, browse our selection of static caravans for sale in North Wales.